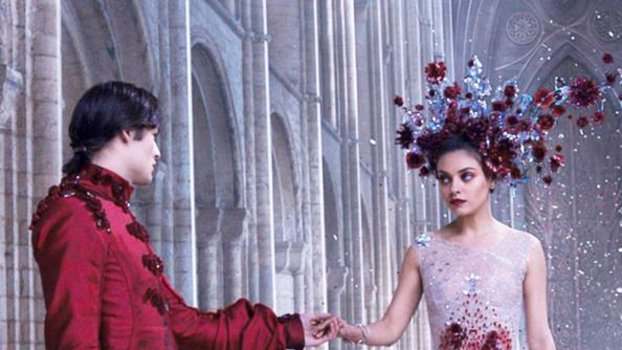 It has been a long time since I have posted mainly because I have been keeping my latest cosplay a secret. I have been quite involved with it and it is very complicated to complete. I just wanted to make sure I had something to share but it has taken time to make.

I will be attending MCM Comic Con at Birmingham in November. The cosplay I have chosen is the wedding dress from Jupiter Ascending. 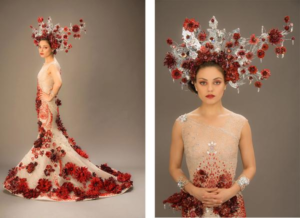 The first time I saw this dress as knew I had to make it, but my is it an undertaking and a half. Luckily for me a few other brave souls have stepped before me and I have to give them credit for doing so as their posts have included invaluable information.

and Warpaint and Unicorns http://www.warpaintandunicorns.com/2015/02/jupiter-ascending-royal-bridal-dress.html

I mention these ladies as they are the sites that I actively used to help with details and information. Warpaint and Unicorns has details regarding the headdress and makeup. EmmalieKate has a very nice close-up flower details that you may miss from film stock photos. And Naergilien, well this ladies blog has the most comprehensive information on the whole outfit. I found it most useful when investigating the crystals used on the dress. If you are attempting this outfit please check these sites as they will undoubtedly help you in the process.

All I can say is thank the internet and thank the ladies for sharing their work.

As the dress is quite detailed I decided to start with the headdress. My husband said the original looked quite large and, after investigation, I found that although it was Mile Kunis’s favourite outfit of the film she said the headdress was incredibly heavy and had to be held up by someone during filming. Well I didn’t want hubby to spend his day holding up my head so I opted to downsize the design. 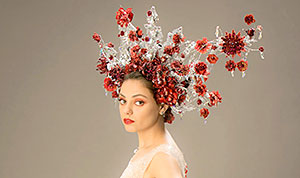 As you can see the design is extremely intricate and I can only praise the designers Finchittida Finch on their work. I started with a wire base after looking at many hat making and headdress sites. Wire bases are typically used for the large headdresses you see at carnivals, such as those in New Orleans or Notting Hill. After covering the wire with duct tape I found that hot glue would not stick to it and thus I had to sew a headband to the bottom of it. This is probably not the best way to go about it but as you will see I have made a few mistakes and have had to ‘wing it’ for much of the work. 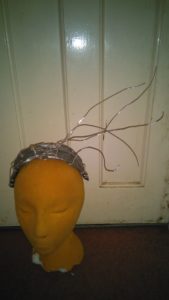 As the flowers and the acrylic design pieces would not stick to the base I created a wire framework for them to stick to. This ended up working quite well despite the mistakes.

I was unable to make the Finchittida Finch designs out of metal or acrylic due to money constraints and so opted for good old cardboard. I did think of foam but either too thin and floppy or too thick and unable to cut holes in. I did try to follow the original design. 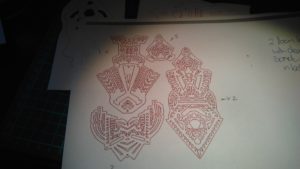 Naergilien has details on this but I really didn’t want to use her work and as it was the cardboard proved too flimsy to cut lots of holes in. I thus ‘winged it’ again but making up a similar design and cutting that out instead. The effect is the same even if the design is not. 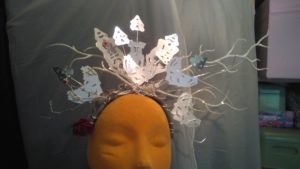 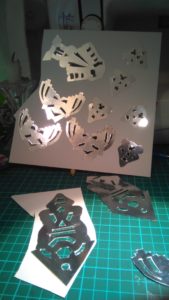 I added some silver coated branches found in a florist. I also spray painted little branches from the garden silver. Upon these I began to stick my flowers.

Some of the flowers came from florists and discount stores. In fact, whenever I am out if I spot a red fake flower I’m on it! I also wanted to make a lot of my own flowers and these also were stuck on the headdress. I will show more of my efforts in this in later posts regarding the dress. All I can say is OMG MASSES OF FLOWERS! 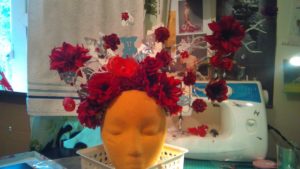 I finished the look off  by hanging crystals off the branches at various points. Despite the pain in my hand caused by cutting out tiny holes in cardboard (twice, as I made mistakes on the first lot), and the amount of hot glue burns, I think the headdress turned out rather well. I just have to hope it stays on my head as if it falls off and crumples my heart will break.