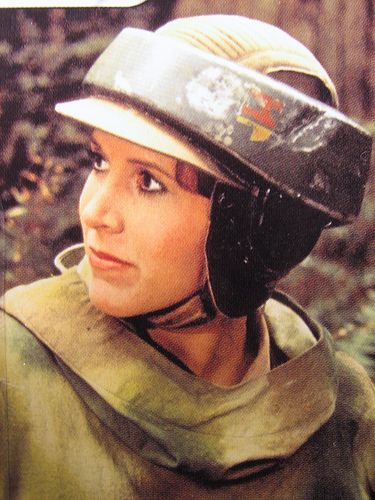 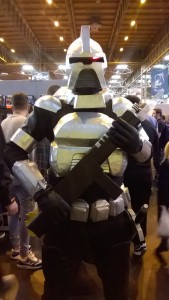 MCM Comic con Birmingham has been and gone. Lots of fun was had and it was my first time taking the kids with me.

My youngest, who is seven, wanted to go as a stormtrooper so I thought I would follow him as Princess Leia.

I am not thin enough to carry off the slave outfit and feel it is often overused as is the white original outfit we see her in. Although I did see a young girl of about six wearing it at the event and it looked just fab. I had a trawl through the princesses outfits and decided upon her battle of Endor uniform.

There are quite a few sites that help you see what the rebel uniform looks like. Lots of Star Wars re-enactment groups specialise in the various uniforms used and they have created fairly faithful reproductions. I had no problem with most of the uniform. Black boots were already in my wardrobe, and a pair of blue jogging pants with a felt yellow strip sewed down both sides finished the bottom half. I did start to fix the strip with fabric glue but it did not stick so sewing was the best option.

The poncho that the princess wears was very easy to make. I found some camo fabric (cotton not canvas as that would be too thick) and measured across both arms to get the width. The length at the front went just to my thighs with the back being slightly longer. After adding up the two lengths I just cut the fabric in an oblong, no shaping at all, that is done by your own body when it is on. I used a plate to cut a hole for my head and added a cowl to this. The cowl is a folded over piece of camo fabric rectangle in shape measured to the circumference of the head hole. I did not go the whole hog and reproduced the uniform underneath the poncho and wore a t-shirt instead as I did not take the poncho off at all. I used an old canvas belt with little pockets and holster fitted for my gun. The belt was slipped through two holes cut into the poncho but only in the front part, leaving the back flowing.


The Endor helmet was more problematic. 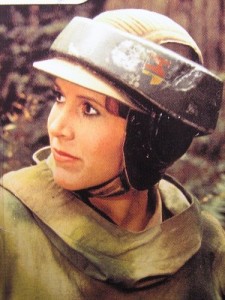 The reproductions on the internet are quite expensive even for the kits (at around $60) so I created my own on a more reasonable budget. Those that I have found on the re-enactment sites are made to be as accurate as possible but I went for a more approximate version.

I used canvas for the hat base with a linen lining. This was basically a winter/timber hat with flaps pattern. I sewed 1/2 -1cm pleats in a strip of calico fabric to create the ribbed hat piece that you can see on the top.
I then sewed leather onto the hat flap along with an oval shape in black canvas with three eyelets punched through. An old headphones ear piece was stuck on top.

The donut was made with a yoga mat (eva foam). I cut it to shape after measuring the circumference of my head with the base hat on, including the
ear pieces. I had to glue the ends together with supper glue as my hot glue was not strong enough. After it was set I covered the donut with a few coats of Gesso and then painted the inside and the outside with green acrylic paint. I added little details like the rebel emblems and silver paint to look like metal damage. PVA glue sealed it over the top. For a first time try It didn’t look half bad. The visor was just canvas with a foam insert which was stuck onto the bottom of the donut at the front.

To top the look off I gutted (yes gutted) a teddy bear to make a backpack. It did take me a while to do this as the poor thing kept looking at me. I changed his face to be more ewok looking and gave him a suede cloak.

Using fur to cover up the stitches I sewed the backpack straps on. It was big enough to hold my phone and purse, leaving my hands free to keep charge of my son.

It was really nice when other more official StarWars cosplayers commented on my outfit. I was nearly chased by some Death Star crew members! 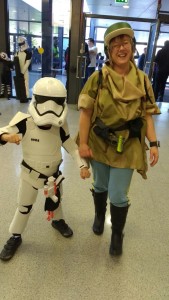 I’ll go into how I made my sons Stormtrooper outfit in my next post.